Some random notes by chriseth 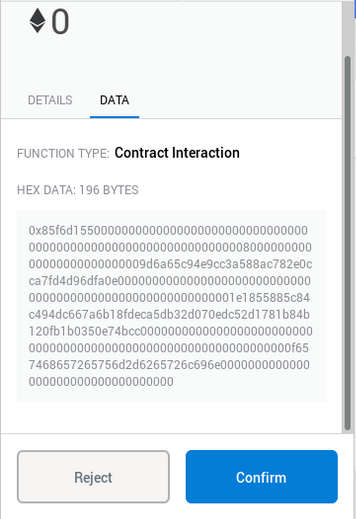 Ethereum wallets ask the user before they sign any transaction. This is an important part of the security and trust framework of Ethereum. The problem is that the more often you confirm these dialogs, the less inclined you are to actually check the transaction. Do you know the pesky “TrustedVendor wants to install software on your computer.” dialogs? Exactly.

Furthermore, wallets usually ask you to confirm things like this:

Oh yeah, sure, good old 0xc47f! I know exactly what this is doing!

If you are lucky, some wallets might go an extra mile and at least format it a bit more nicely into

but this only works for very few contracts and very few wallets.

The “4 byte directory” contains a list of all function signatures that match the so-called “function selector”, the first four bytes in the transaction data that determine which function of the contract you intend to call. The problem is that they are only four bytes and collisions (two different functions from different contracts having the same selector) are not that rare, so you might get the wrong name of the function. We can do so much better! Especially since the transaction signing was actually planned to be much more user-friendly from the very beginning.

Natspec, also known as the “Ethereum Natural Language Specification” is a special way to document functions of smart contracts. Furthermore, it includes a simple string templating engine, so that the actual function parameters can be inserted.

As an example, take the following contract:

The function setName is nicely documented, and instead of showing

setName(“Chris”) in the transaction confirmation dialog, this should actually show something like:

As it turns out, many developers of smart contracts are using natspec. So why do we not have that information in the confirmation dialogs? No, it is not the wallet developers that are to blame. Unfortunately, it is much more complex than this. But we were never held back by complex problems! It is possible to get to a point where wallets can show such a confirmation dialog and avoid things like collisions in the four byte directory. It can even be decentralized!

Read about what needs to be done (it’s not much!) and by who (mostly all of us, unfortunately) in the next part of this series.

Thanks to Bhargava and Mathias for review!